Dr. Cassellius,
Yesterday, Steelworkers, Teamsters, and Autoworkers assembled at 6:30 AM at the BPS food home-delivery operation at the Freeport bus yard to honor our co-workers who have died from the pandemic in recent weeks, all of whom worked on BPS’s last day, March 16th.  All the Unions in one voice were there to demand 100% compliance with Emergency Standard Operating Procedures (ESOP), Now!
This is what Workers Memorial Day looked like at 6:30 AM.

This 8:32 video is what
USW Local 8751 President Andre Francois
said, after a moment of silence:

BPS and its agent Transdev have daily for over two months now continued to disrespect our Unions; to neglect Priority #1, the health & safety of our frontline members; to financially harm our members and their families who are risking their lives for the operation; to fail to respond to our concerns, demands, and Class Action grievances; to fail to remove racist, anti-union managers; and to exclude us workers – without whom no busses roll anywhere for any reason – in your operational and “reopening planning”, outlined in Tuesday’s Boston Globe article, “Reopening of public schools this fall would come with daunting issues. Schools need a plan for everything from bus rides to hand-washing to assessing the damage from a spring of online learning. By Malcolm Gay Globe Staff, May 26, 2020, 6:45 p.m.
https://www.bostonglobe.com/2020/05/26/nation/reopening-public-schools-this-fall-would-come-with-daunting-issues/
“Half of our bus drivers are older than 60,” said Cassellius, who’s a member of the working group. “You can only imagine the contingencies we are building in terms of our fleet, in terms of our scheduling.”
Although you have refused these past 63 days to return Steelworker Staff Representative John Buonapane’s call to you and to respond to Local 8751’s many communications to you and your Superintents and Department Heads regarding Transdev’s many violations of our Health & Safety ESOP and Collective Bargaining Agreement during this emergency food-supply operation, Local 8751’s Executive Board has decided to publicly write to you again following your public comments about us.
For the 62nd day yesterday, as we mourned our dead, not one of the bus drivers, mechanics, monitors, dispatchers, safety/security personnel, community volunteers, Transdev and BPS management could properly perform the CDC’s #1 COVID-19 precaution, because there was no usable soap nor warm water to wash our hands at Freeport.
For the 62nd day, no one – not Sam DePina, BPS Superintendent for Operations and Safety, not Jeff Carty, Transdev’s GM, not terminal managers, not a single worker at the operation – has ever seen nor received direct evidence of the phantom “auto-body” company that Transdev claims it has contracted to daily disinfect the busses and our worksite facility.  We have reported for 2 months and collected evidence and testimony of fraudulent documentation, nepotism, and unqualified persons and procedures in this deal which puts thousands of peoples’ lives at risk. Yet Transdev has daily failed to arrange our long-standing demand to meet these mystery men, including yesterday.  We are forced to imagine and believe, like in the Wizard of Oz, that this life-or-death, mandatory, daily disinfecting is being done professionally by the man behind the curtain.  If our efforts to have confidence in the daily disinfecting of our worksites continues, the Unions’ investigation will need to be reported to the media and higher authorities for enforcement.
Local 8751 notes that Sam DePina has regrettably removed BPS Director of Transportation, Delavern Stanislaus, from daily communications with Local 8751 for the last month, despite our repeated requests to meet with her.   As the first Black woman since 1974 in the Director’s position who has worked her way up in the department, she has proven her desire to value the input and cooperation of drivers and our Union for the valuable, street-level knowledge and insight only we can provide, including during the first month of the food distribution operation when we designed the worksite for COVID-19 prevention.  She should be permitted by your office to attend Local 8751’s daily operational meetings, as we have requested and daily invited her.
For the 60th day, Transdev’s wrongful, discriminatory termination for alleged improper idling in early March of Local 8751’s shop steward and 26-year veteran driver, Macaire Dupuy, has been allowed by your office to poison labor/management relations.  Imagine, a Paris-based transnational profiting in 104 countries so hell-bent on its 7-year-long anti-Union tirade in Boston that it would fire a human with a family without due process after the COVID-19 shutdown for some alleged pre-shutdown idling infraction for which he’d already been disciplined and returned to work with 3 other drivers, then have high-priced lawyers argue that the Union has no right to the CBA’s grievance appeal process during the emergency shutdown!
For the 62nd day, neither BPS’s billion-dollar budget managers nor Transdev’s multi-million dollar sweet-heart deal makers have been willing or caring to print large font “Worksite COVID-19 Requirements” on signs, like are required to be posted everywhere else on the frontlines in this city.  You don’t have to imagine, because it is well-documented, that Local 8751 members have themselves made these required signs about “Mask Required”, “Temperature Required”, “Physical Distancing Required”, “Hand Washing Required”, etc., only to have them ripped down, twice, by a recently-hired, racist, anti-Union Transdev manager, Patrick High, whose only previous school bus experience is being friends with Transdev’s AGM Marcy Elliot, who wrongfully fired our good members after the pandemic shutdown.  The videos of High’s Unfair Labor Practices as defined by the National Labor Relations Act when he futilely attempted to lock-out Local 8751’s Emergency Health & Safety Task Force representative this past Monday 5/25/2020 have been widely viewed. 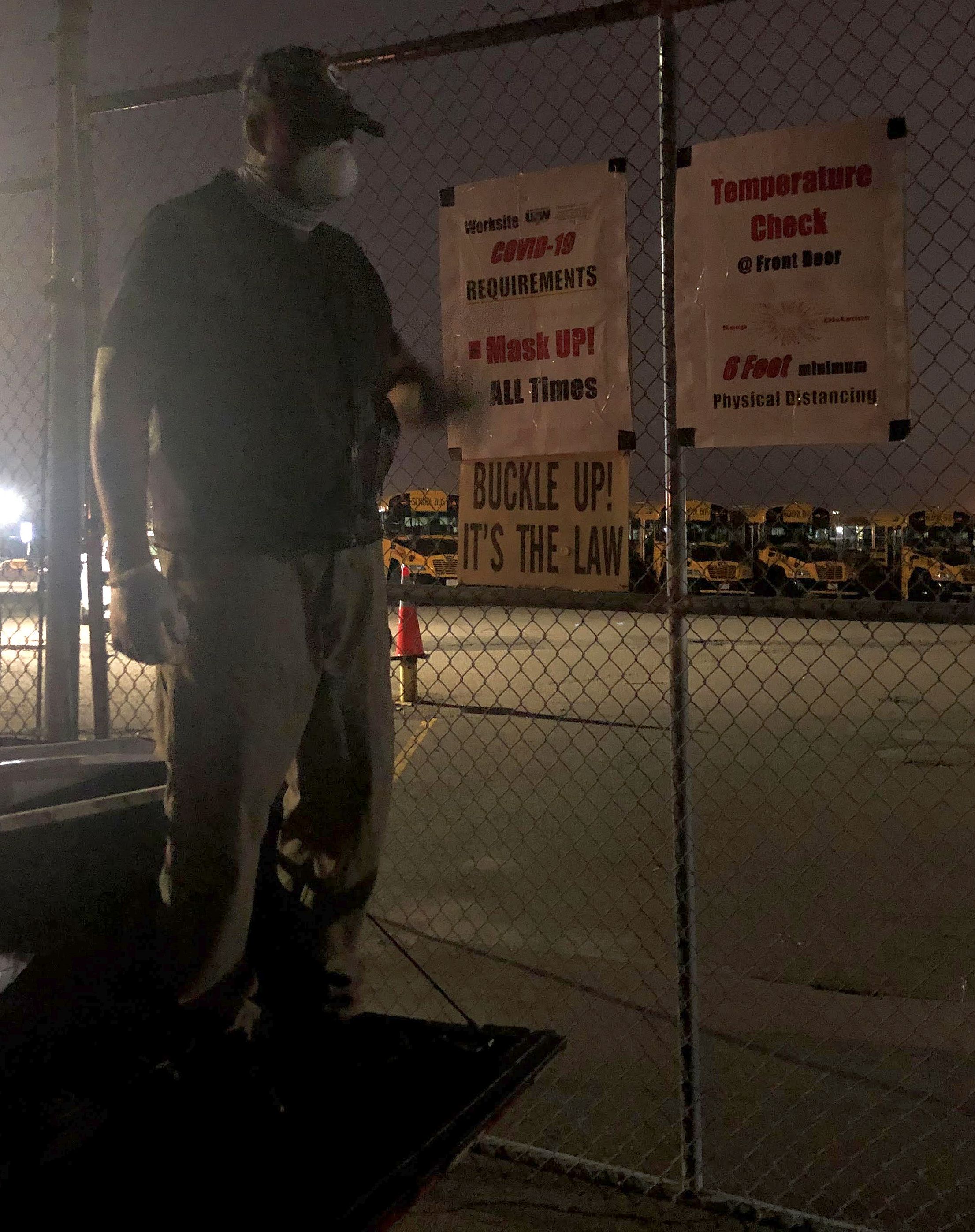 Grievance Chair Murchison replaces torn down
Union Health & Safety signage at the front gate
at 4:00 AM on Tuesday, May 26th.

For the 59th day, Transdev has refused to publish the Emergency Standard Operating Procedures (ESOP), the first draft of which was offered by BPS Director of Transportation Delavern Stanislaus on April 5th, the most recent May 18th draft attached.
For the 91st day, Transdev has ignored the Steelworkers’ lawful request of February 28, 2020, to re-open contract negotiations for the CBA’s economics, including rightful retirement benefits for our over 100 members who have performed service for BPS for over 30 years, a CBA provision negotiated and agreed on by your predecessor with Mayor Walsh and Transdev’s corporate leadership in the Eagle Room, signed by the parties in late September 2018, thankfully avoiding an October 1st strike deadline.  Transdev’s failure to respond is in itself an illegal Unfair Labor Practice. (see attached February 28, 2020, letter)
For the 62nd day, there is No COVID-19 Testing for the hundreds of workers participating in the BPS food home-delivery operation, despite available technology for both active virus and antibodies and despite the widely known fact that our families and we are continuing to become infected with the virus, 3 members of one workers’ family this week.
We could go on with what hasn’t been provided to Steelworkers, Teamsters, Autoworkers, and every other worker and volunteer at this frontline and essential BPS operation, as the pandemic, mass hunger, and unemployment plague this city and country.

Rather, Steelworkers Local 8751 demands the following:

P.S. Local 8751 has learned this morning of the death by COVID-19 of our dear co-worker and friend, 22-year bus driver Bill Doorley.   Rest in Power, Bill! 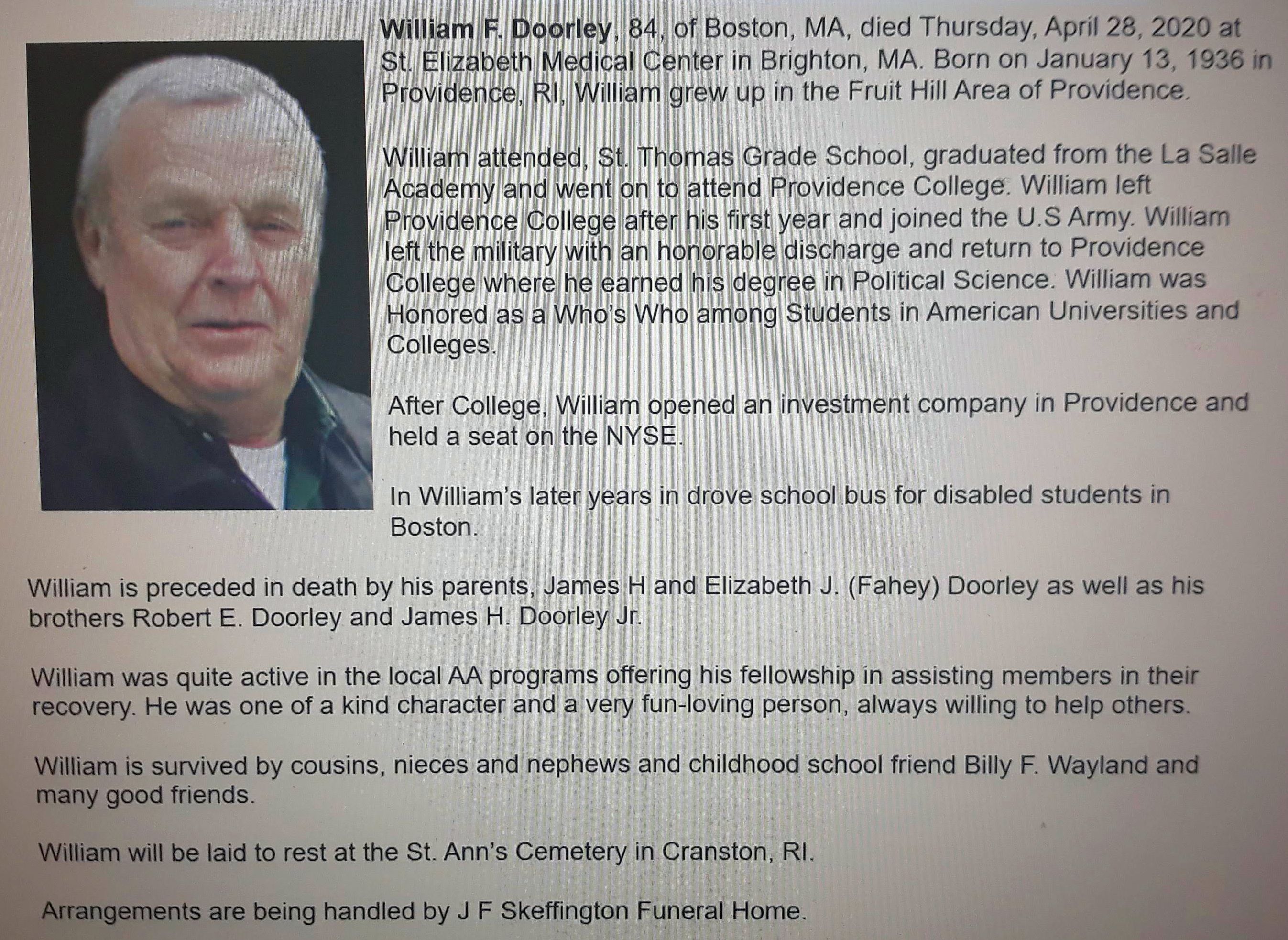 There could be no more poignant reminder to the parties of Local 8751’s commitment and resolve to the Emergency Standard Operating Procedures and our positions above. 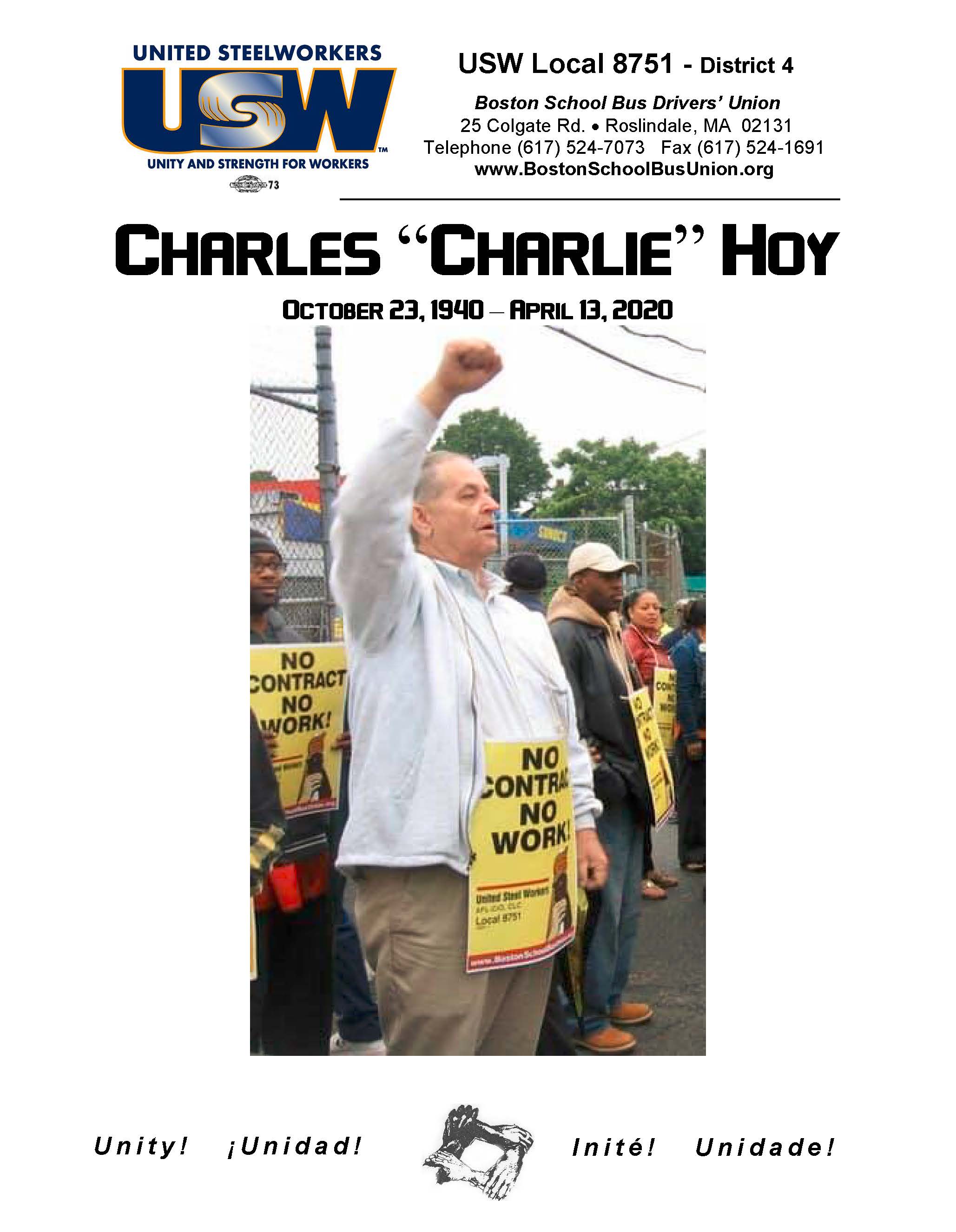 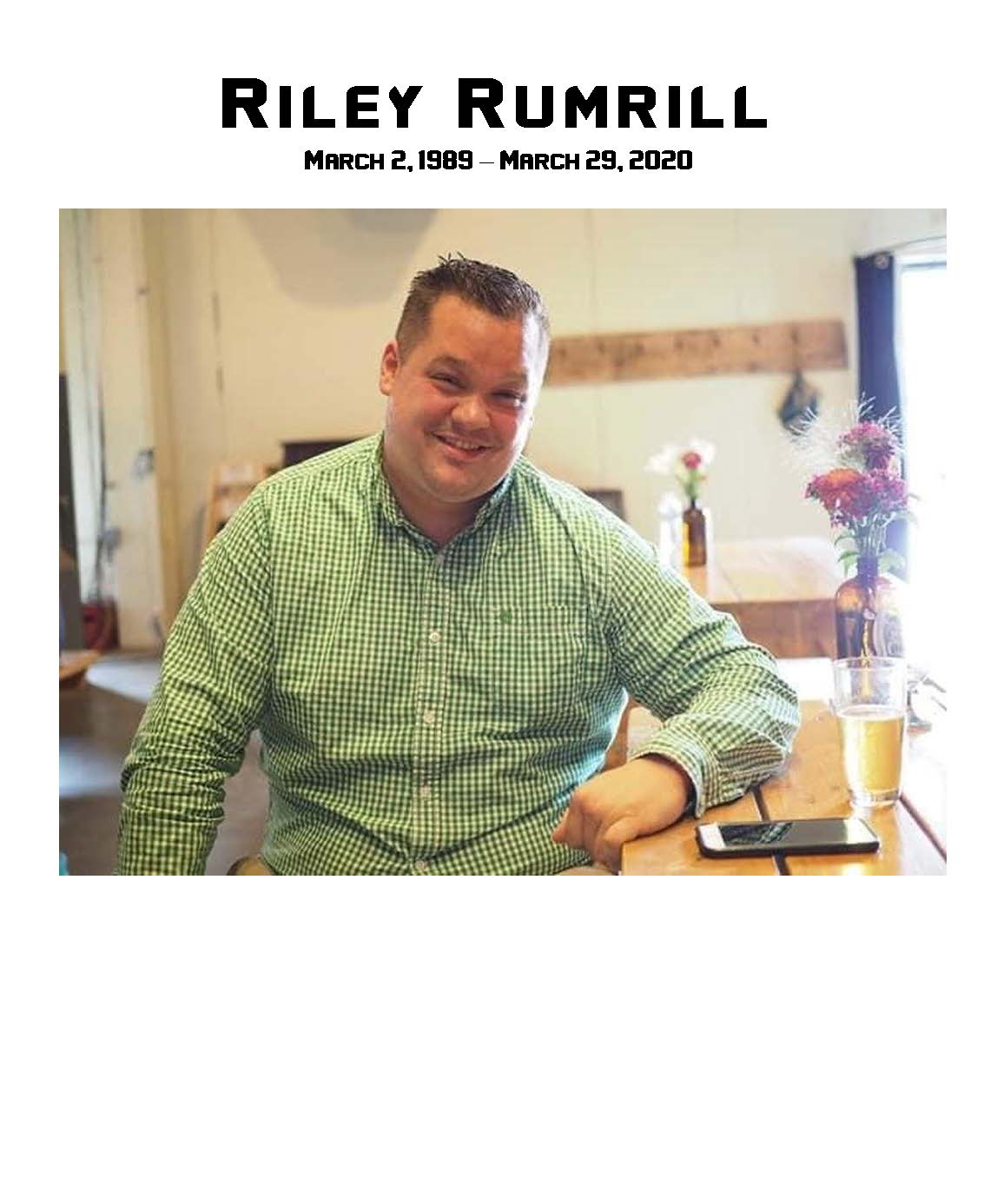 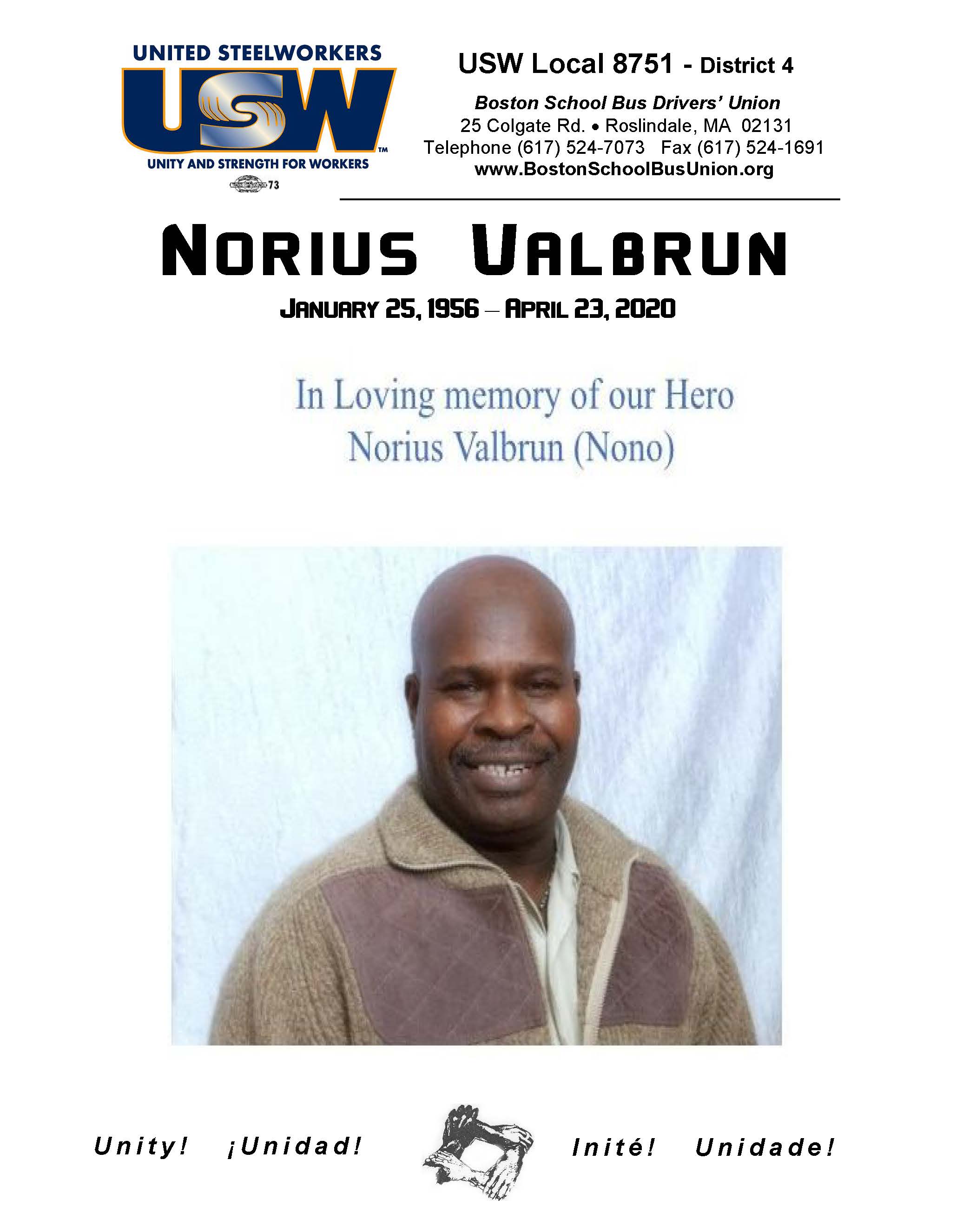 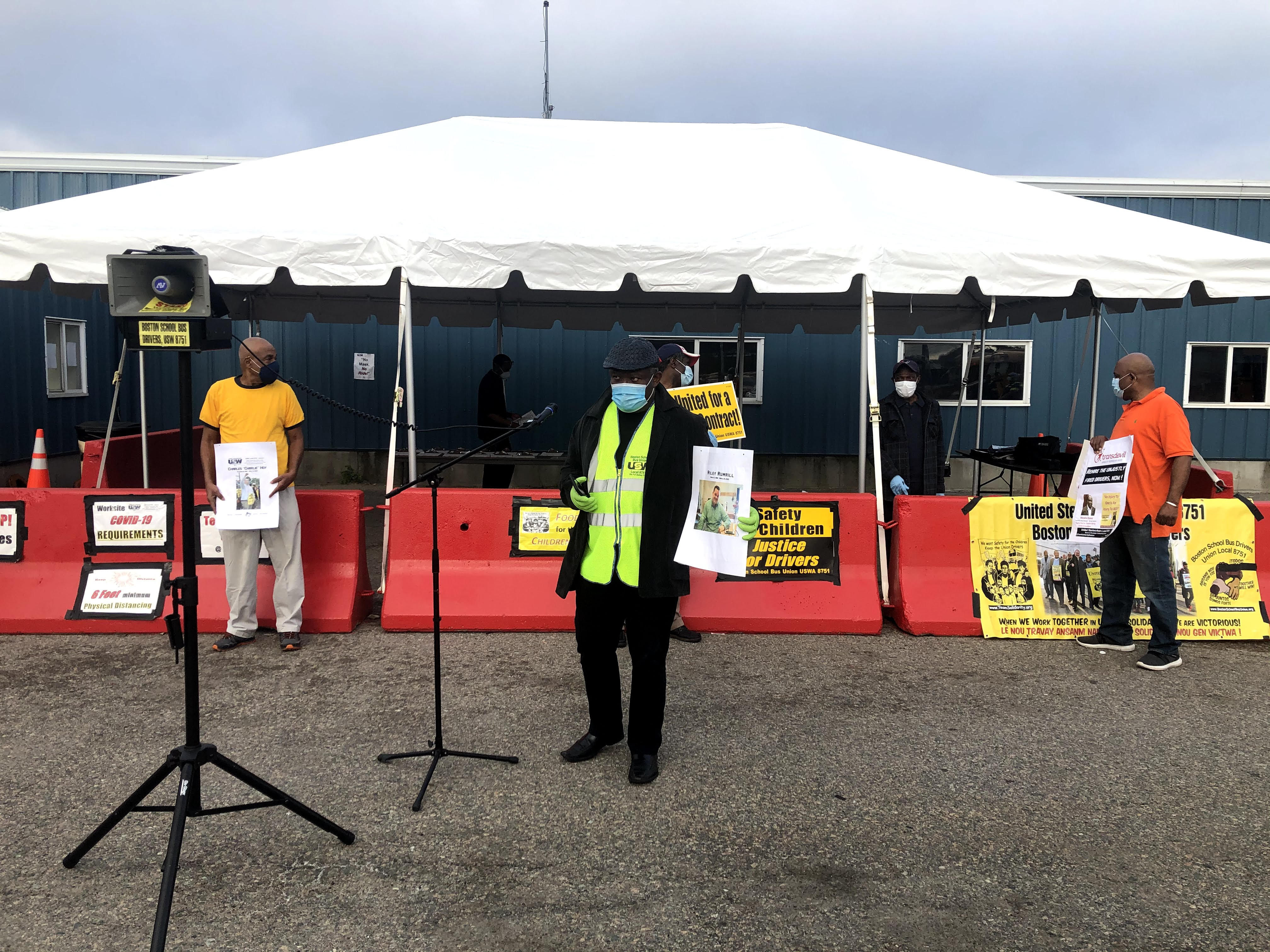